Bryonn Bain is a UCLA professor jointly appointed in the African American Studies and World Arts and Cultures/Dance departments, as well as a prison activist, spoken word poet, hip-hop artist, actor and author. He is the founder and director of UCLA’s Prison Education Program, which was launched in 2016 to create innovative courses that enable UCLA faculty and students to learn from, and alongside, participants incarcerated at the California Institute for Women (CIW) and Barry J. Nidorf Juvenile Hall (BJN).

LD:     Many of the concepts behind Theater of the Oppressed sound a lot like improv. 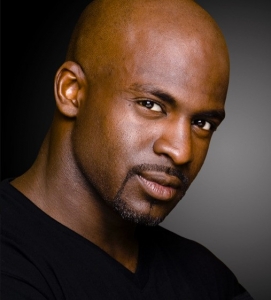 BB:     Absolutely. The culture of “yes, and” is really about being solution oriented [by saying] “here we are, how are we going to make this work?” Being flexible and able to adapt in the correctional facilities is an essential skill. You cannot survive if you can’t figure out a way to deal with constant change.

I taught courses at Rikers Island over a 10-year period. The city jail in LA has more people than any other city jail in the country – or the world – but Rikers Island is the largest penal colony. It’s 10 jails on one island and there were between 14 and 15 thousand people incarcerated there when I first started teaching classes. I developed relationships with a lot of the folks inside and over that time, enough trust built up that I was able to work with them to do poetry, theater, and film classes.

They actually let me film Lyrics From Lockdown there. It was the last December of the Obama administration. Rikers Island rarely lets anyone film there, but we had been planning the shoot for nine months, and two weeks before we were going in to film, we got a call from the White House. The Obama administration invited Academy Award winner Tim Robbins and my crew to go there and bring the production. We were like, “That’s great! That’s amazing!! When?”

And they said December 17. That was the day we’d been planning to go to Rikers Island. So we turned down President Obama and the White House to go perform at Rikers Island. Of course, we showed up at Rikers and it was raining cats and dogs. We had a 20-person film crew covering their equipment with garbage bags so that it didn’t get destroyed. And as we get to the wing where we were supposed to shoot, the correctional officers come out and tell us that they actually had a lockdown. They tear-gassed the wing where we were supposed to perform and weren’t sure if we were going to be able to go through with the shoot.

In that moment, you can imagine the kinds of things I’m thinking to myself. But what are you going to do? “Yes and,” right? So we figured out how to adapt to the situation to make it work. After seven hours, we were able to go in and do the show and bring a little bit of hope and, hopefully, a little bit of joy to our brothers who were there and could use some of that at that time.

“Some of those people behind bars are our most talented folks and brilliant minds. We cannot forget they locked up Mandela and Martin and Malcolm and Socrates.” — Professor Bain

LD:     How did the incarcerated students you were working with respond to being asked to write poetry?

BB:     It’s overwhelmingly positive. There is sometimes some initial hesitation, especially the younger you go, for a range of reasons. But two experiences crystallize what I find most valuable about those experiences.

One was the first time I taught in a juvenile facility that was not predominantly black and brown, which most of the facilities in New York and LA are. I was in the Clark County Detention Center in Ohio doing a residency with Wittenberg University. I asked if we could do something at the juvenile hall since it’s right down the street and they let me bring in professors and students.

On a Monday, I performed there and hosted a workshop for mostly 15-year-old white boys. I’d never had a class like that, but I did my thing. They got really into it, so I decided to go back on Wednesday and do a poetry slam. There was this one student – named James, who was sentenced to 98 days at the facility and was scheduled to be released that Tuesday.

BB:     He requested a 99th day so he could be in the slam on Wednesday — and then he won! So he left the next day a champion of language; of education; of poetry. He had a new relationship to literacy and his own sense of agency with the wind at his back.

Another situation that stayed with me is when we launched the NYU Prison Education program, the first for-credit program at NYU in 2013. We created an application process for all of our courses so they are taken very seriously. We asked every student, “Why do you want to participate in higher education while you’re in prison?”

One young brother looked at me and said, “I need to pursue college in prison because prison is like Medusa. If you focus on it too much, it will turn you to stone. I need to focus my attention somewhere else.” And that just gave me chills. All I could say was, “Please take my class!” That stays with me.

I think people in prison are some of the easiest folks to forget about. Part of the Prison Education Program’s mission is to make sure we realize that we have folks who are valuable members of our families, our communities, our city and country who are incarcerated. And some of our greatest minds — our greatest geniuses — are incarcerated. Look at the statistics, and it’s not even just 1 in 10, but as much as 1 in 3 or 4 of the folks in our communities are incarcerated, depending on which demographic you consider.

Some of those people behind bars are our most talented folks and brilliant minds. We cannot forget they locked up Mandela and Martin and Malcolm and Socrates.

Many in prison simply could not stay on the conveyor belt and do what everybody else did. Some folks made mistakes they should be able to learn from by being introduced to more humane interaction with others than prisons make possible. Others rebelled in a certain way, or just didn’t fit into the mold or the system, or simply made bad choices.

We have countless folks locked up for the use or sale of substances state governments have either since legalized, or should decriminalize since the Center for Disease Control determined addiction is a disease. It should be treated as a public health and wellness issue — not a matter for criminal prosecution or punishment. You can’t lock away addiction and the economies it generates and expect them to disappear. Prisons are an ineffective solution to this problem as they are most others. They only make it worse.  There is a trillion-dollar, global pharmaceutical industry turning profits by engaging in the practice of medicating to treat trauma, illness, and addiction that we are locked up for every day in this country — and the U.S. is the number one importer of pharmaceutical drugs in the world.

Countless others still are wrongfully charged and awaiting trial for stretches of time so long they are undeniably cruel. And others, like my friend Nanon Williams in Texas, are convicted of a crime they did not commit. He was thrown on Death Row at 17 for a crime even a federal judge says he didn’t commit, and has been behind bars surviving in cages for over 26 years.

So I think about the work we do not as for charity, but for change and transformation. It’s for creating opportunities not just to teach folks who are incarcerated, but also to learn from folks who are incarcerated and ensure more voices are heard and involved in shaping the direction in which the nation and the world are moving. If we forget about these folks, we are losing out on the invaluable opportunity to actually participate in learning with and from them.

View this post on Instagram Bryonn Bain was wrongfully arrested, and thrown in jail for a crime he did not commit. He later sued the ...